Sifting Through The Ashes, Part Nine – About those Voters…

Posted on 2017-01-11 by BeeManDave
Greetings and Salutations;
The fallout from the Election continues,  as the day the donald will be sworn into Office approaches.   Last night,  President Obama gave a really great,  farewell speech, in Chicago.  A recording of it is available,  and if you have not seen it,  I strongly urge you to take a quiet hour,  watch it,  and contemplate on the messages in it.   The President touched on many issues  that apply both to the Political world and Real Life.   It was amazingly sad,  and uplifting at the same time.   As an Academic,  and Community Organizer,   President Obama has honed the ability to communicate a message so that every person hearing it feels as if he is speaking to them.   It was clear,  and very well said.   If you want to do it later, then great.  If you want to do it right now…even better,  I will be happy to wait!
One of the important issues President Obama brought up  was the peaceful transition of power from Administration to Administration.   He is correct, that this is a hallmark of our Democracy,  and is terribly important.   Alas,  this particular transition is rather less easy than many previous ones have been.   In my voting career  (I first voted for Nixon when he was re-elected to a second term –  More on that later)  I have seen the two main parties swap positions several times.  While I have not been comfortable with Republicans taking power before,  this is the FIRST Election where the incoming Administration seems Hell-Bent on not only destroying the advances in society we have made since the 1950s,  but,  is taking aim at the heart of our Democracy,  with the intention of killing that foolishness off,  and putting in a “REAL” government.   To go from the quiet and patient elegance and intelligence of President Obama,  to the ravings and chaos of the donald is a fearful thing to contemplate.    I can only hope that the moderate republicans in Congress will come to their senses,  and will realize that Constitution and Country far outweigh Party in this world  (A point that President Obama ALSO makes in his speech).  There have been some efforts on the part of Moderate Republicans that are heartening, if they can grow,  and not be squished by the shorter-sighted members of the Party.
That having been said…there remains the problem of us voters.   This election has stirred up more emotion than any previous election I have seen.   There have been smaller,  regional issues that were pretty hot, and, like the Civil War,  split families in two,  but, this is the first time that almost every American has a strong opinion and will get really emotional when one attempts to discuss differing views with them.   I am still amazed and interested by the mind of humans,  and so I have been trying to interact with as many points of view as is possible,  to try and understand what has brought these folks to believe what they believe.   This has been a challenging task for me, both because I, too,  have an unpleasant emotional reaction to this election,  and, there are challenges with talking to folks who support the donald.   It can be challenging to deal with them on a civilized,  polite level. 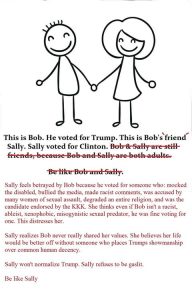 This meme has started circulating around Social Media over the past few days.   The original one consisted of just the BLACK parts.   The edit  is a recent change, and points up my conundrum with understanding the Mind of America.   Of course,  I have a few thoughts on how this graphic affects me, and my reactions to it:
IF, they are really “Adult” and really “Friends”, then, I hope that Sally will engage with Bob and try to understand why he DOES support the donald. I have been trying to do that, and to discuss why I find their support of the donald pretty worrisome. However, that has proved to be a challenging path.  Let me take a moment to lay out some of the things that I have run into with voters of all persuasions, over the past 18+ months.
Now,  I realize there are far more than just TWO political parties in the United States (at least as of today).   However,  the above categories fit a fair number of folks that vote for the alternative party candidates too.  Also,  as history shows us, Alternative Parties do not do well in the United States (and I will offer some analysis as to why this is true elsewhere)  For example,  in the 2016 election,  in terms of overall vote,  the alternative candidates, combined together,  got less than 8% of the popular vote.  Now,  I have, at times, voted Third Party, although when I do, I am fully aware that I am making a statement, not influencing an election with my vote!   Since I live in a Deep Red State,  the votes of most voters do not matter,  as there is a 99% probability that the Republican Party will sweep the National Offices.  This reality extends to the Governor’s office as well.  It is not until one gets down to the county level that it is possible for Democratic or Independent candidates to gain office.
The end result of all these factors meant that some  49% of the voters in America did not cast a vote in the 2016 election.  Democracy in Action?   Not really by MY definition of the word, alas.
Now…after all that ugly stuff,  I ask myself,  what can I do, as an individual,  to improve the situation.   It can seem like an overwhelming problem, and incline a person towards giving up and keeping one’s head low, in order that the storm will blow over and no debris will smash into them and ruin their life.   I certainly have to fight that fear almost every day.   So…what do I propose to help the situation.

Your Elected officials pay attention when 10,000 emails show up.   They pay attention when thousands of constituents call them up.  Why?  Well, it is fairly simple.  They like their jobs!  They know that the folks that are contacting them are the voters that care and are paying attention to what they are doing.  They are also the people that can vote for someone else if they are sufficiently unhappy with the job the incumbent is doing.

Politicians might ignore a petition with 10,000 signatures, but, 10,000 emails, phone calls,  or snail mail notes make a big impact and will get their attention.

Only 9 days to go.
God Help Us All!
Bee Man Dave