I have been unable to avoid the turmoil over the ongoing madness in the Political world these days.  One thing that I have observed is that the Republicans have pushed a big chunk of their motivations for the ongoing cuts in social services and government  so far behind the rhetoric that it is easy to forget that the programming exists.  However,  it does…and if we fail to recognize it,  the process of understanding and fighting against their “Slash and Burn cuts” to these programs will be more difficult at best,  and impossible at worst.

Much of the world view of the Republican party leaders is firmly rooted in the philosophy of Objectivism.   This school of thought is based on these precepts:

A somewhat longer and more detailed discussion of this philosophy and its failings is available here..

A major proponent of this philosophy was the author, Ayn Rand.  (here is  More information about her life)   Her two major books:   “The Fountainhead” – published 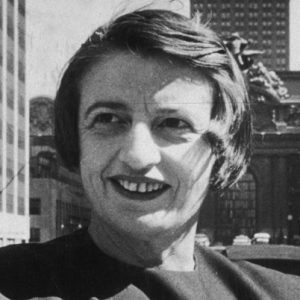 in 1943,  and “Atlas Shrugged” – Published in 1957 have  became quite wide-spread,  best sellers.  They have  helped generate a movement that exists today.  However,  her main claim to fame is her creation of  the philosophy of Objectivism.   She used her books  to expand and  polish it to the point it exists today.  For those who have escaped reading Ayn Rand’s works,  here follows a synopsis of her two,  major novels.

Based on the definition of Ethics used by the Objectivists,   there is no call for society or individuals to provide aid to the disadvantaged.   As a matter of fact,  Ms. Rand,  in “Atlas Shrugged”  expresses quite a bit of contempt for the poor and disabled…calling them  “parasites”, “looters”, and “moochers who demand the benefits of the heroes’ labor”.   She hated the idea of any form of a welfare state,  decrying the very concept ,  and saying that ALL Citizens should succeed on their own with out the help or support of the Government or any other citizen.  What caused this hardening of attitudes towards government and the needy?   Let us look at her life to see if there is any insight there.

Ayn Rand was born into a fairly privileged life in Russia.  During her Formative Years,  her father was a quite well off  Pharmacist,  who apparently had quite a gift for the profession,  and so garnered accolades and wealth.    However, In 1917, her father’s shop was seized by Bolshevik soldiers during the general upheaval of the Civil War that kicked out the Czars and installed the Leninists and the family was shipped off to the Crimea.  In that event, they ended up   losing all of their wealth,  and were forced to  live in poverty until she managed to escape to the United States in 1926.   These events,  at pivotal points in her life,  really solidified her dislike for Government and the power it wields.   I suspect that the 9 years or so of living in the Crimea impacted her too,  as she and her family were one of many in the area who were stripped of wealth,  and likely heard quite a bit of complaining about how they deserved a better life,  and bitter comments  about how the Czars had lived the high life,  and when the Communists,  led by Lenin, took over,  they failed to distribute the wealth evenly as promised,  and so kept most of it for themselves.   If she had a bit too much “hero worship” for her father,  the conflict between the humiliation of being cast into poverty,  and the great life that his perfection had provided would have gone a long way towards killing off any Empathy she might have had for the downtrodden.  it has been my observation over the years that unless a person has spent significant time in self-reflection,  and worked on self-awareness,   that person will ALWAYS assume that everyone around them has a life and skill set that matches their own.

Does any of the above sound familiar?   It should!   Buried in the proceeding text are most, if not all,  of the basic tenets of the Republican Party as it exists today!

Most, if not all,  of the Republicans in power now look upon themselves as “Ubermensch”  –  The Overlords –  who have started out with nothing,  but, through the dint of hard work,  persistence,  and their own innate excellence,  have been elevated to the Lofty Position of Leaders of the Citizens.   Listen to their rhetoric.  It drips with the attitude of “I am smarter than you;  I am more educated than you;  I know what is best for you,  far better than what you could understand”.    Right Now,  the administration is working to eliminate  Health Care rules and regulations from the body of Law we live under…They are working to cut back, or eliminate programs such as Medicare/Medicaid  and Social Security.   They are working to build trade barriers that will give the manufacturers in America an advantage.  They are working to eliminate the tax burden that they have right now,   so instead of having to support the parasites,   they can keep all that lovely money for themselves.

The adherents of Objectivism though,  ignore the fact that their picture of their life story is, in most cases,  a lie.   Look at the makeup of Congress and the Administration today.   A vast majority of the Republicans in that body were born to rich parents,  have lived a life of privilege,  and, have NO concept of how the huge majority of Americans live today.   Also,  the fact is, as we are already seeing, they lack Empathy, or concern for anyone who is not themselves, or outside of their immediate family.  Objectivism,  as a basis for an entire society,  is doomed to abject failure.   It fails to take into consideration these very real facts:

So…as you listen to the pontifications of the Republicans in charge…Remember Ayn Rand, their God and Mentor,  and what her  flawed view of how reality should be can bring on.   It explains a lot about the actions they take and the laws they attempt to pass.

What can we do to combat this?   There are a few, fairly simple steps that can combat this blight on Society.

Here is some useful information I have gathered together and am scattering around the Net.  Feel Free to repost to your Social Networks…If you have read this far,  you are likely NOT happy with the idea of living in the dystopian society that the Republicans want to create,  so,  hopefully this information will make it easier to contact your Representatives (from local and state up to Federal) to let them know what you feel about the job they are doing:

First off, understand that anyone that tells you that a communication from you as a Constituent, to your Representative is a waste of time, because the politicians only pay attention to the lobbyists that write them the big checks, is lying to you. They are likely fearful that if you DO contact your Representative, it will destroy their chances for some big score from the Government.
Now…to help change your government and what it is doing, there are some simple things to do.
1) Use this tool – https://www.govtrack.us/congress/members or this one https://www.usa.gov/elected-officials to track down YOUR Representatives.
2) Email or call them to let them know your objection or support for the item of interest. When you do this, be SURE to follow these guidelines:
…..a) Be Clear about what you are talking about.
…..b) Do not write a lengthy, emotional rant. Be polite, and simply tell them whether you support or oppose the issue, and give them a single reason why you feel that way.
…..c) Repeat as necessary.

CLING to the basic truth that “All that Evil needs to succeed is for good people to do nothing” and use that as motivation to send that next Email or make that next phone call.

Your Elected officials pay attention when 10,000 emails show up. They pay attention when thousands of constituents call them up. Why? Well, it is fairly simple. They like their jobs! They know that the folks that are contacting them are the voters that care and are paying attention to what they are doing. They are also the people that can vote for someone else if they are sufficiently unhappy with the job the incumbent is doing.

Politicians might ignore a petition with 10,000 signatures, but, 10,000 emails, phone calls, or snail mail notes make a big impact and will get their attention.

Feel free to distribute this block of text. It is available for use under the Open Source License – https://en.wikipedia.org/wiki/Open-source_license. The only limits are that it must stay intact (but can be extended) and I would appreciate a credit if used.

2 Responses to What Drives Republicans?