the donald and the BSA

Posted on 2017-07-26 by BeeManDave
Greetings and Salutations; 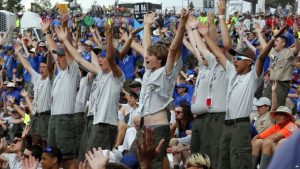 Boy Scouts sing and dance to music as they await the arrival of President Trump at the 2017 National Boy Scout Jamboree at the Summit in Glen Jean,W. Va., Monday, July 24, 2017. (AP Photo/Steve Helber)

I have said before that it appears there is no depths to which this world will sink and America will run towards in its march to relevance in the world.   This last Monday,  we had another example of that,  when the donald visited the Boy Scouts of America’s Jamboree.   Held every four years,  this time there were about 40,000 boys gathered for it.  There are quite a few transcripts and recordings of the speech that he gave to the assembled crowd of Scouts,  so I will not waste space here  going into it in detail.   However,  I do have a few  things to point out about it.
The Scouts brought no honor to their organization either.   They were good, little, stooges,  applauding and cheering when the donald talked about what a great president he was,  and,  booing President Obama on cue.   I can understand the donald’s behavior, after all,  HE was never a Boy Scout.  However,  every one of the 40,000+ folks in that rally  have,  time and time again,  sworn the same Oath.  For those of us whose memory is fuzzy…here it is:
On my honor, I will do my best
To do my duty to God and my country and to obey the Scout Law;
To help other people at all times;
To keep myself physically strong, mentally awake and morally straight.
Every one of those Scouts recites and swears to adhere to the Scout Law  which says:
A Scout is:
Trustworthy,
Loyal,
Helpful,
Friendly,
Courteous,
Kind,
Obedient,
Cheerful,
Thrifty,
Brave,
Clean,
and Reverent.
Their actions at this rally upheld NONE of these goals..and in deserting that Oath and Law,  every one of them besmirched the reputation of the Scouts,  and crapped on the grave of Baden-Powell.   I can only hope that yesterday and today,  the reactions of that crowd has triggered some serious discussion about Scouting,  and what those words mean,  between the kids and their parents or Scout Masters.   I also hope that every one of these kids will have the insight and wisdom to contemplate and learn from the fact that they were conned by a flim-flam man  into deserting their beliefs,  and that it took a painfully short time to do this.
In the past couple of days,  there have been a number of reactions,  and much discussion on the News and Commentary channels.   There are reports that a noticeable number of parents are pulling their kids out of the Scouting program because of this event.   There have been an increasing number of condemnations of the event and its political nature, from Eagle Scouts of all ages.   The administrators of the Scouting Program in America issued the following press notice
“The Boy Scouts of America is wholly nonpartisan and does not promote any one position, product, service, political candidate, or philosophy,” the statement said. “The invitation for the sitting US president to visit the National Jamboree is a long-standing tradition and is in no way an endorsement of any political party or specific policies.
“The sitting US president serves at the BSA’s honorary president,” it continued. “It is our long-standing custom to invite the US president to the National Jamboree.”
The fact that there is no comment about how appropriate it was to inject politics into this speech is glaring by its absence.    Other,  regional leaders,  were rather more blunt about it,  saying that the speech was wrong and should never have been given.
Another factor in this debate is that as part of the rules of the Organization,   and its attempt to remain non-political,  it is required that if a Scout is involved in a political event,  it is fine for them to wear the uniform when acting as a Color Guard or the like  However,  any further activity requires that they change OUT of that Uniform, and into civilian clothes.
The BSA has its problems and is not totally clean of politics,  of course.  The ongoing debate over allowing LGBTQ folks in to the organization is still not resolved,  although the BSA has taken some courageous steps forwards on the issue.   The Para-military aspects of the organization are not always the most comfortable thing to deal with.   That having been said, though,  I am of the opinion that the organization does more good than evil in the world.   The skills that kids in the program learn will stay with them,  and give them the ability to handle the random problems of life in a more positive fashion.   The values that the Oath and Laws teach will reinforce their path to becoming good, productive and positive Citizens.   The group functions of Scouting,  ranging from local camping trips, to events like the Jamboree,  hone their ability to work as a team,  and may be the only introduction to people with radically different views.  That introduction is important, of course, because it can help build understanding,  and tolerance into their Rules for Life.    One of Baden-Powell’s goals was to ensure that every boy that came through the program would end up with these values engraved on their heart, and that these values would become a guiding light for their life.
This event went a long way towards eroding away those values, though, and taught some lessons that are destructive,  hateful,  and the complete abrogation of what a Boy Scout should be.
it is hard to know what to do to clean up some of these issues.   Luckily,  I am far past Scouting,  and have no children in the program,  so,  I do not have to spend sleepless nights trying to decide what to do about this.   I would like to see  some things happen in the future, though.

Baden-Powell  wrote the following in his final letter to the International Organization he created:   “… I have had a most happy life and I want each one of you to have a happy life too. I believe that God put us in this jolly world to be happy and enjoy life. Happiness does not come from being rich, nor merely being successful in your career, nor by self-indulgence. One step towards happiness is to make yourself healthy and strong while you are a boy, so that you can be useful and so you can enjoy life when you are a man. Nature study will show you how full of beautiful and wonderful things God has made the world for you to enjoy. Be contented with what you have got and make the best of it. Look on the bright side of things instead of the gloomy one. But the real way to get happiness is by giving out happiness to other people. Try and leave this world a little better than you found it and when your turn comes to die, you can die happy in feeling that at any rate you have not wasted your time but have done your best. ‘Be Prepared’ in this way, to live happy and to die happy — stick to your Scout Promise always — even after you have ceased to be a boy — and God help you to do it”

It would do well for the BSA to re-read this,  and work to return to that vision of what the Organization should be.  Perhaps,  with time and effort,  the Members, present and past, of the Scouts can restore some of the honor lost this week.