Posted on 2017-08-31 by BeeManDave
Greetings and Salutations!
.
On August 21, 2017,  I,  along with millions of Americans,  made an effort to be in the path of Totality  of the Solar Eclipse.   I have been  witness to a number of partial eclipses,  but,  this was my first,  Total Eclipse.   It was a surprisingly profound and moving experience for me,  and,  I am still mulling over what I witnessed over that 3 minute period covering the last moments of the Sun’s disk being covered,  the time of Totality itself,  and the return of the Light.  In this post,  I am goi 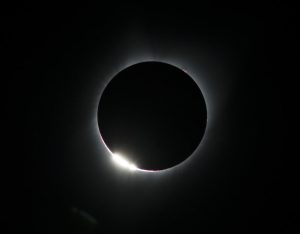 ng to focus more on the Science,  and discuss the non-squishy things that I observed during this event!   As it turned out,  I was lucky enough to be in Springfield, TN, for the Eclipse (visiting inlaws).  Springfield was located about 15 miles SOUTH of the Center of the path of Totality,  so,  we were treated to almost 2 minutes of the Umbra.  This was great,  as it allowed me time to observe around me,  and still have time to look up at the Sun,  to admire the Corona, and see the Diamond Ring when the Moon started to uncover the Sun’s disk.
.
I had contemplated on the weeks leading up to the day,  that I would make use of my wife’s good DSLR, and lenses,  to image the Eclipse itself.   However,  I decided  that,  since there were going to be a FLOOD of cameras pointed at the Eclipsed Sun,  that I would concentrate on the events around me, here on Earth.   Subsequently,  I still have no regrets about this decision.   There were many interesting things happening over that short period that I would have missed,  had I been staring up at the Sun and Moon.
.

Of course,  as I had seen before,  as the Moon started to cover the 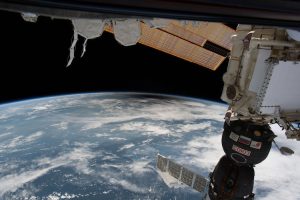 Umbra as photographed from the ISS

Sun’s surface,  the light around us gradually dimmed.  As it got darker and darker,  it seemed as if a blanket of silence was being laid across the world.   The Cicadas,  which had been buzzing along with enthusiasm through the morning hours,  fell silent.   We had heard and seen birds flying around the skies and chirping from the trees.   The birds gradually ceased making noise.   While Springfield is a rather smallish bedroom community for Nashville,  it is large enough that as the morning passed,  I could easily hear the sounds of traffic,  and music from a small Fair that was set up a ways from the house.   Even those sounds faded out with the last gleams of Sunlight,  and the darkness of Totality  covering the world. 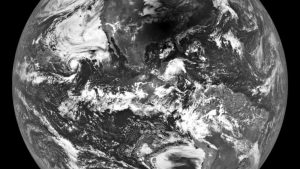 The quality of light during an Eclipse is quite interesting and weird too.  Normally,  when the world goes dark,  it is because of Sunset.   The quality of light changes to a warmer,  more orange or reddish tone as it is filtered through more of the atmosphere by the Sun “Setting”.  Not during an eclipse.  While the intensity of light fades,  the quality of the light remains  a silvery-blue that is the normal spectrum of full Sunlight.   Also,  when Totality passes across one’s location  the light level drops,   it is so sudden as to be shocking.  It is as if a giant light switch had been clicked off.  It became VERY dark.  It was not pitch black by any means, and still, the quality of light remained that silvery-blue that I mentioned before.   However, it was dark enough that people some 50 feet away from me were little more than moving shadows.   I had looked in the direction of the approaching Umbra,  and while I did not get a good or lengthy look at it,   I did see it in the distance, roaring across the landscape towards us.  The shadow on the Earth, and the column of darkness reaching into the Sky had an almost physical presence.   Since the Umbra moves at about 1500 MPH,  it was but a heartbeat after I saw it that the darkness of Totality engulfed us.   I took a moment to look around at the horizon right after Totality started.   Again,  it was a very weird moment.   I could,  off in the distance,  see the oranges and yellows of a Sunset…however,  unlike a “normal” Sunset,  that color was a circle that surrounded us entirely, and looked the same in ALL directions.
.
.
Another aspect of the Eclipse was the change in temperature.  While I did not have a recording thermometer,  there was a distinct ramping down of air temperature as the Sun’s disk was covered by the Moon.   The area where I was at was a stone patio,  by a swimming pool.  When the Sun was blasting down with full strength,  there was a distinct feeling of heat from the light reflected back from the flagstones.   That decreased slowly as the Solar Disk was covered by the Moon.   When Totality hit,  the temperature dropped a few more degrees…very suddenly.  The temperature when the Eclipse started  had been up above 90F.   At Totality,  it was almost chilly,  as if we had lost about 20F.   It was not uncomfortable,  by any means,  but it was quite noticeable.   After Totality Passed,  and the disk started to re-appear,  the temperatures warmed right back up to that 90F level.  For a 3 minute period,  it was quite a roller coaster, though.
.
I did hold off putting my protective glasses back on until just after seeing the Diamond Ring as the Moon moved past the edge of the Sun’s Disk.  However,  even the tiny sliver of the Sun that was revealed a few seconds later was painful to look at,  so, it was very good to have the glasses.
.
. 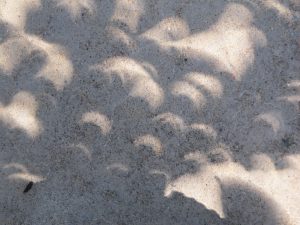 I had learned,  quite some time ago,  that the spaces in the leaves of plants that allowed dots of Sunlight through would act as a pinhole camera,  and produce many, small images of the crescent of the Sun’s disk  in those couple of minutes before and after the maximum Eclipse happened.  Luckily right next to where I was observing from,  there was a rose bush that provided a number of these small apertures,  so I was able to get a picture of the Crescent Sun on the concrete of the wall.  Again,  something interesting and different to look for during the Eclipse.
.
.
.
. 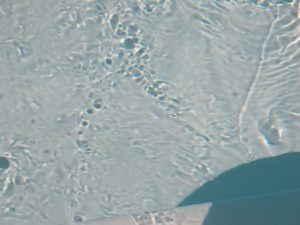 To touch on light effects again…we all know that when we look at a shallow swimming pool,  the bottom of the pool will be covered with a grid of light, looking rather like a net.  That comes from the tiny wave peaks in the top surface of the water,  focusing the Sunlight on the bottom,  like a long lens.   Well,  as the Sun was being covered by the Moon,  and became closer and closer to a point source of light,  instead of a large disk, that grid disappeared.  All that was left were some expanding rings where spray from a circulation pump was hitting the surface of the water.   These rings were small enough that they were almost completely wiped out by the grid,  and the width of the disk of the Sun.   They were normally just kind of fuzzy shadows on the floor of the pool.   This was likely because the point source of the Sun in its last moments before it was completely covered  allowed these tiny variations in the surface of the water to focus a sharp image on the floor of the pool.
.
.
One other positive thing about this Eclipse was that I was able to point out some of these phenomena to other folks with me,  and,  I think that their experience viewing the Eclipse  was enhanced a bit.  I did not pester them a lot,  but, for things like the small, projected Crescent Sun images,  had I not called their attention to them,  they would never have seen them.
.
I was glad that I was able to observe almost everything I had on my mental checklist.   For example, while I was looking at the Corona,  I also observed Venus (which was VERY easy to see.
.
However, there were some things that I did NOT manage to observe (after all,  1:55  is NOT a lot of time!)    I looked for Mercury,  but,  in the short time I had,  I saw neither it, nor the couple of other planets that should have been visible.   I also   was not able to see any stars.  While they were theoretically visible,  the air around Springfield was a bit hazy,  and so,  there was enough sky-glow that it was even hard to see a lot of details in the Corona.    I did not see the “Shadow Bands” that often accompany the moment of Totality, and really did not even look for them.   However,  those things do not detract from the experience at all.
.
.
God Help Us All!
.
Bee Man Dave