Why not declaw cats?

The following post came to my attention today, and if there is ANY question in your mind as to what the answer to the question in the title is…Read the article, and look at the pictures…then tell me you would be OK with this still being legal. 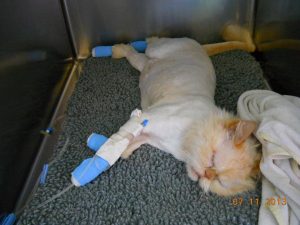 In 2013 Blue Boots was surrendered for behavioral issues including litter box avoidance and extreme aggression. Fortunately, someone stepped in and Blue Boots went to a Specialty Purebred CAT Rescue foster. The vet through SPCR found the cause that explained everything, though most people would not have connected the dots, as Blue Boots’ original owner did not. See, years earlier, Blue Boots had undergone a 4-paw declaw procedure. It’s quite routine and widely accepted in the US and even vehemently defended. What you see in these photos are the deformed claws that were growing WITHIN and THROUGH Blue Boots’ paw pads. 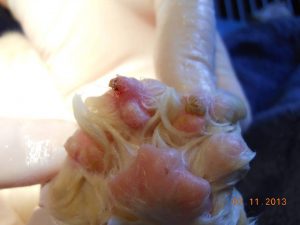 In one study of declawed cats in a particular shelter, one vet found that 66% had left over P3 fragments from the declaw being performed improperly. 33% of them had more than 5 fragments. Of those with fragments, 45% had at least one fragment larger than 5 mm. 28% had a 100% fully BOTCHED declaw procedure, meaning they had bone fragments larger than 5 mm left in each declawed toe. 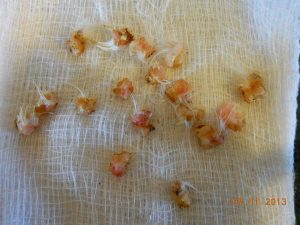 In the case of Blue Boots, he was 100% botched, meaning those bone fragments left behind in each toe also included a part of each nail bed. Over the space of time after his declaw, the ingrown claws caused constant pain and resulted in his litter box issues and his aggression. Again, his owners weren’t able to connected the behavior with the cause and he would have been killed.

If an individual MUST have a declawed cat, either due to the potential health risks of a possible scratch or due to the rules of their living arrangement, please consider adopting an adult feline from a rescue or shelter that has already been declawed. If a child colors on a wall, you do not cut off their fingers. You teach them not to. The same applies to kittens and training them to use an appropriate scratching surface. There are so many alternatives and humane solutions. This is not merely my opinion, but a truth based upon the research of countless veterinary professionals, proven statistics and studies done throughout the world. Declawing is now banned in 28 countries.

While I agree with most of the article,  I take a firmer stand on declawing.   There is NO reason to declaw a cat.   It is an abusive and barbaric custom that has no place in today’s society.    I have also found,  from some research,  that too many Vets push this procedure for cats because it is a high profit option, requiring almost no effort on their part,  and allowing them to charge a large fee.

If the issues mentioned above are a factor,  I suggest one of these courses of action:

I hope,  if you have read this far,  that you will contact your state government  and your Federal representatives to push them to implement legislation that will make this terrible act illegal in the entire country.

Because this barbaric policy still continues,  I have added another entry discussing this practice, and the problems associated with it.

God Help Us All!