Allegiance? Allegiance to WHAT?

Today, February 19th 2017, is the 75th anniversary of a shameful event in America’s history. Executive Order 9066 (issued on February 19, 1942), signed by FDR, authorized the forced removal and Internment of approximately 120,000 Japanese-American citizens. These folks were immigrants who had lived in the country for decades. a third of them were children…making them “Natural Born Citizens”. Why was this done? The attack on  Pearl Harbor had awakened an irrational fear in the mind of the public. The Japanese had attacked on, of course, December 7, 1941. Over the next month or so, a wave of paranoia swept the country, and ALL people of Asian descent were looked upon with suspicion. There were rumors that they were here, spying on the war effort, and preparing for an attack from the inside of the country. These rumors were false, created and pushed by faceless people. Some of the rumors started out of fear. Some, I suspect, were pushed by people who held an agenda to acquire more assets for next to nothing from the dispossessed Citizens. 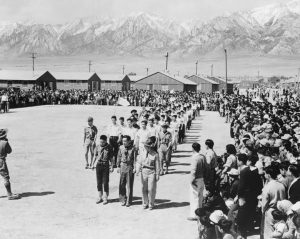 If you want to see some video,  click HERE

These videos have many more pictures and information on the events of the day.

In spite of the fact that these were hard-working, American families, and there was NO evidence of any anti-American sentiment or actions among them, after the E.O. was signed, Army troops were dispatched to tens of thousands of homes, marched up to the door with rifles loaded, and bayonets fixed, rounded up the folks living there, put them on a train, and dragged them out into various remote, unpleasant

locations. There was no talk of Constitutional Rights, or Citizenship…society turned into a panicked, fearful, wild animal, and struck out at “The Other”. These Citizens lost millions of dollars of assets, often having to sell their property for pennies on the dollar; They lost their community, when it turned against them; They lost their businesses and their jobs;   They lost their dignity,  and worst of all,   they lost their Constitutionally protected Rights. 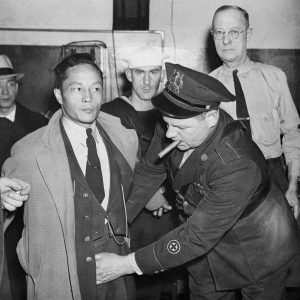 The living conditions they were put in were poor, to say the least. The camps had barracks built, but, they were of the shoddiest construction – Light construction,  No insulation; no attempts to seal against air leaks; public toilets, located in separate buildings. Food was short, and medicines almost non-existent. The excuse for that was the fact that it was war time, and everyone had to deal with shortages. Of course, it is also true that for many of the White Americans living in the area, and the White guys guarding the camps, these were the enemy…they LOOKED just like them, after all, and if the troops overseas were able to engage in terrible atrocities against our boys, these families were likely to do the same thing. So…supplies, I am sure, “disappeared” or were diverted to the War Effort.  Every year now,  on the Last Weekend in April,  the Survivors of these camps,  and their families,  hold a “Rememberance Day” to recall that dark time,  and show respect for those that lived through it but are now gone.  One of the camps,  at Manzanar, is now a National Historic Site,  and has a museum  and some re-built structures and fences.   HERE  is an strong essay about the 2016 gathering.  It is really worth reading….so go ahead…come on back when you are finished…I will be waiting! 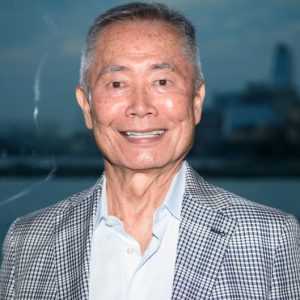 George Takei was a 5 year old boy when his family was swept up by this madness. He was old enough to recall very clearly the time in the camps, although, as he says He looked at it through the eyes of a child – protected and insulated from some of the horror by his parents, and, unaware of how his Civil Rights had been violated. A decade or so ago, though, he was moved to ensure that this event in American History was not forgotten. It easily could have been, as I, for example never heard word one about it all the way through the history courses at High School. So, he, in collaboration with others, worked to create a Musical dealing with that period. Titled “Allegiance“, it is certainly in a class by itself.  First off, it proves that Musicals need not be laugh riots (See “Oklahoma”, for example) While there are moments of humor in it, it is a challenging movie to watch. To be drawn into that period of horror and unfair treatment, and to see how these people leaned on their inner strength to come through it with dignity and honor caused me to weep. The human tragedies played out in the film are engrossing and very real. All the performances are honest and strong…perhaps, partly because a large percentage of the performer’s families had been in the United States during World War 2, and so had been a PART of this Internment. George Takei played a couple of roles in the production, and I have to give him high marks for that. His portrayal of two characters (the Grandfather of the protagonist’s family, and the protagonist himself at an advanced age) was subtle and very well done. The two characters were similar enough that it was obvious that they came from the same blood-line, yet different enough to create two, distinct people that we, the audience could relate to. 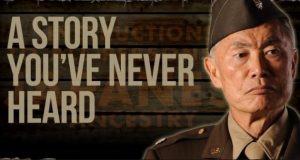 I mention these two things in my preface, because,  today,  my wife and I went to see the movie. This is the second time it has been released for a short (I.E. one day) run, and, alas, we missed it last year. My wife asked me, as we were heading out from the theatre whether I enjoyed it. Some questions are difficult to answer, and this was one of them. As I told her, I thought it was a very worthwhile thing to see, and I did not regret the time at all. However, I am still in a Dark enough place that to say I “Enjoyed” it would be a stretch. It was hard to have such a clear reminder of what despicable and narrow minded people we Americans can be. However, if any of you have a chance to go see “Allegiance” I STRONGLY urge you to make the time, and watch it. I also suggest that you arrange the schedule so you can go to a nice restaurant afterward, have a good meal, and chat about the production, and digest what you have just seen.

“Allegiance” is important today not just for the fact that it examines a serious failure of America,  but, also as a warning that we need to watch out for, and fight against, events like that ever happening again.  Sadly, this warning is too relevant today. Look at the current administration, and the message it is pushing over and over again about Muslims. Followers of Islam are the new group of “The Others” that inspire hatred and fear among too many Americans. Some of the actions called for by the current administration have sounded chillingly like the actions and decisions that FDR took in 1942. Let us, as Americans live up to that motto “The Land of the Free and the Home of the Brave”. Do NOT become sucked into the Evil that the administration preaches, and repeat the mistakes of E.O. 9066. As “Allegiance” points out, this contaminates society, and makes us far worse than we should be. It can cause hateful words that truly hurt to be hurled back and forth, and leave wounds that separate us for decades.

Please…this one time…learn from our history of past mistakes, and fight to avoid repeating them.