Greetings and Salutations;
This morning, three bombs were set off in the heart of Brussels,   leading to the death and injury of thousands of people.  It is easy enough to find detailed articles on this tragedy online, so, I am not going into those bloody and foolish details here.

Rather,  I have been somewhat interested in the American reactions to this event.  Of course, The Donald is saying that this is unacceptable, and when he is president, he will change the rules to allow our agencies to torture prisoners to get the information out of them.   Needless to say,  this ignores the fact that time and time again,  it has been proven that torture is a useless method of getting useful information out of an enemy.  All it does is push them to a point of telling the torturer what they want to hear,  in order to make the pain stop,  or pushes them to a greater level of hate, and likelihood that they will become a more violent opponent.   I just saw this post on Social Media, that I felt had to be replied to here:

“Deep deep down it’s jealousy…. The west has it all… When you live like dustmites that’s gotta make you a little green and disgruntled.. Some kids build huge castles out of blocks and others like to come along and kick them over… Guess who’s who?”

Now,  while this may have  a grain of truth in it,  it does show a lack of understanding of the motivations of the Middle Eastern Radicals who are often responsible for these acts.   This is what I wanted to address.

1)  Is it really jealousy that motivates these attacks?   I think not.  Not only does the West NOT have it all,  there are a number of other societies around the world that look at our greed and possession driven society and shake their heads in disbelief.   To claim that Western Civilization is the height of perfection shows a parochial point of view, a view that is based on prejudice not fact. 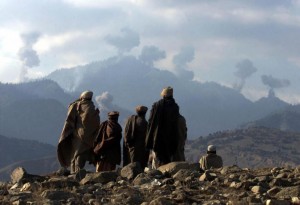 for many,  many years longer than America, and likely will still be here when America is nothing but a footnote for a history class.   It is true that the standard of living in much of the Middle East does not compare to American Middle Class (What little there is left of it),  but that has more to do with the fact that we, and before us the Russians,  have been pounding their infrastructure into fine pebbles for decades with machines of war.   The Middle East is also  an object lesson about the society that America is moving towards.  It is a society where a very small percentage of the people have all the money and power,  and the vast majority of the citizens are barely scraping by.  It is further along that path than we are,  but we are on that same road. 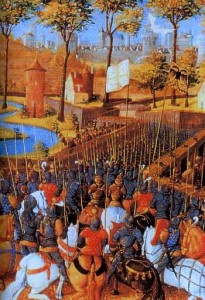 3) The post also ignores the religious aspects of the conflict between the fundamentalists in the Middle East and the rest of the world.   There is a small subset of Muslims who are driven by ignorance and fanaticism,  taught by Imams who pervert the words of the Qura’an,  to push their agenda of hate and death.   These people are not driven by greed.  They are driven by propaganda and a mistaken belief in their Scriptures.   We have the same sort of people in the United States.

An extreme example is that of Westboro Baptist Church,   although there are a lot of groups who believe they are following the teachings of Christ, but are only one or two steps away from these fanatics.   Now, I, for one, tend to think that this factor is one of the strongest,  as the West has been attempting to attack the Middle East for hundreds of years.   That is a legacy that can build a LOT of resentment.   Think, for example of the Crusades.   The West sent this army of heavily armed men into the Middle East,  and those men used the excuse of trying to free Jerusalem to rape, pillage burn and kill huge numbers of the inhabitants.   The Knights had no honor there,  they were no better than barbarians.   Jumping to a much more recent time,   a few decades ago, the Russians went into Afghanistan to “pacify” it.  they pitted heavy tanks against guys with rifles.   I suspect, that there were a fair number of atrocities committed during that conflict too.   Then,  after the Russians got tired of playing War in the area and bailed out,  American leaders came up with a nonsensical reason to justify their sending in troops to continue killing a few combatants and hundreds of thousands of innocents, including women and children.  This is no way to get a war to wind down!

Now…what can we do to improve the situation?  As individuals,  perhaps nothing huge –  Unless you, the reader, are the Leader of a Middle Eastern country,  or are one of the Ultra-Rich in America!   However,   we can each make small steps forward and with enough of us,  a mighty force of change can, perhaps help.   We can study the ENTIRE text of our Holy Book(s) and work to gain understanding of the full message of Christ, or Mohammed.   We can treat others around us with respect and not fear and hate.   We can work to support the organizations that oppose discrimination against people, both citizens and guests in our country, and finally,  we can vote for representatives on ALL levels of government that look to the welfare of the citizens and do what is necessary to keep America a country with goodness in its heart, and not evil.   It is a hard thing to do, and requires constant vigilance,  but, with work and time,  we can change the path America is on.   We can make it more difficult for people around the world to hate us, and wish to bring us harm.   The Right-Winger’s claims that the entirety of Islam is the enemy is both wrong, and suicidally foolish.   Apparently these candidate wanna-bes do not realize that if push comes to shove, there are 350 million Americans,  but, there are 1.3 BILLION Muslims in the world.   We are the minority here, and the probability that we would win a contest of violence with the rest of the world is slightly less than you or I winning the PowerBall lottery.   It is nothing but foolish grandstanding to claim otherwise.  It seems to me that it would be far more productive to work with the moderates in these countries,  to support their efforts to bring a more sane and modern for of government to the area.